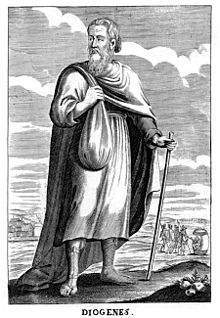 Diogenes of Sinope was born in 412 BCE or 404 BCE in a Greek colony named Sinope. Sinope which is now exists in modern day Turkey, falls along the south coast of the Black Sea. Diogenes was an ancient Greek philosopher whose main interests fell in asceticism and cynicism. Unfortunately, none of his personal works survive to this day but he is survived by other philosophers of antiquity mentioning him in their own works. Born to a banker by the name of Hicesias, it is possible that Diogenes was to follow in the family business. Diogenes however traveled to see the Oracle of Delphi and was given the advice to “deface the currency.” He took this literally and metaphorically, returning to Sinope he defaced all of the currency of his father’s creation, and then traveled to Athens to challenge the customs after being exiled from his home city.

There he set the example of his philosophy by living by his virtues. He philosophized how man should live more in accordance to nature and practiced this by living in a tub. He was seen as odd in Athens because his avoidance to earthly desires and pleasure were in contrast to Athenian lifestyle. He spent his days in poverty making it a virtue and provoking Athenian citizens. He is notorious for carrying a lamp around in broad daylight to look for a human. This was his insult saying that the Athenians were not good people and that they lived without virtues or morals. He traveled to Corinth and mocked the works of Socrates and Plato. He even publically mocked Alexander the Great.

Diogenes died in Corinth in 323 BCE. He had no expressed his opinion regarding how silly it was to respect the dead after they have passed. He even said he wanted his own body to be thrown to wild dogs to feast on because one should not care what happens to their body after they lose their self awareness.

Diogenes of Sinope. Internet Encyclopedia of Philosophy. By Julie Piering